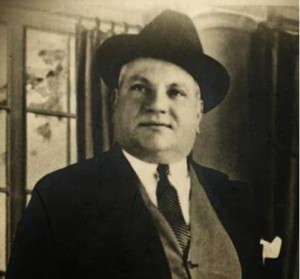 Benedetto Angelo Palmeri was born on January 12, 1878 in Castellammare del Golfo, Sicily to Francesco and Anna Caleca Palmeri. He was known as Buffalo Bill.

Benedetto Angelo (BUFFALO BILL) Palmeri traveled to United States arriving in New York City abroad the S.S Lombardia on Sept 7, 1906. He started working as a laborer on docks. By 1912, he relocated to Buffalo and opened a tavern on Dante Place. He supplemented his income with rackets including gambling, extortion and loan sharking. Palmeri was one of eleven saloonkeepers detained during an Aug. 28, 1912, gambling raid by Buffalo Police in the Canal District. He was convicted and fined $50.

In 1913, He was married to Rosaria Mistretta who was a cousin of Buffalo Mafia boss Giuseppe DiCarlo’s wife Vincenza. By the end 1913, he moved to an apartment above the Dicarlos. They became partners in the Dante Place Saloon. In 1915, Palmeri was arrested for stabbing a police officer and was fined $250. His reputation was enhanced by the nickname “Buffalo Bill,” allegedly awarded him because he wore cowboy hats and carried a holstered pistol.

During this time, Rosaria Palmeri gave birth to a daughter. When the child was baptized in November 1915, two of Giuseppe DiCarlo’s children, Joseph and Sarah, served as godparents. Later, Rosaria developed serious health issues and was unable to tend the needs of her infant daughter so Angelo left her in the care of his in-laws in NYC.

Palmeri moved from Buffalo and opened a cigar store in Niagara Falls. The store served as a front for gambling. Following the death of Rosaria In 1919, he married Loretta Mistretta, the older sister of his late wife Rosaria.

In 1921, Palmeri was charged with the murder of Emilio Gnazzo. Gnazzo was shot by a gunman who jumped from behind a parked car and fired a bullet into his head. The victim’s wife witnessed the killing and identified Palmeri as the gunman. The witness did not come forward for the trial and Palmeri was acquitted and released.

After the death of Giuseppe DiCarlo in July 1922, Angelo Palmeri moved back to Buffalo to help care for DiCarlo’s family.

Palmeri and his brother Paulo (Paul) controlled the flow of liqueur through Canada during Prohibition. The Prohibition Era provided several opportunities and benefits for underworld organizations, it also brought brutality, as competing bootleggers attempted to enter the arena.

Angelo Palmeri experienced a number of health issues following the end of Castellammarese War. He died on the driver seat of his automobile parked in his driveway due to a stroke on 21 December, 1932

When you click the image above, you’ll see 2 Icons appear beneath it. Clicking them takes you to the Amazon page.