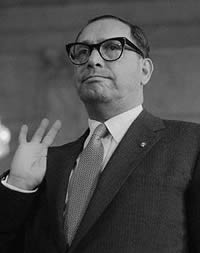 Born – December 1, 1899 Birth Location – Palermo, Sicily, Italy Birth Name – Gaetano Lucchese Died – July 13, 1967 Introduction Tommy Lucchese was born on December 1, 1899 in Palermo, Sicily, Italy and died on July 13, 1967. He was Sicilian born American gangster and a founding member of the mafia in United States. From 1951 to 1967, he was the boss of the Lucchese crime family from 1951 to 1967, one of the five crime families in New York,that still bears his name. Beginning of His Criminal life At the age of 11 Tommy Lucchese moved to United States with his family. He started running in New York’s East Harlem neighbourhood. He was befriended by Lucky Luciano and together they formed the 107th street gang. The members of this gang were involved in stealing wallets, burglary, and other hustles. At the age of 18, Tommy Lucchese started a window washing company in East Harlem; anyone who refused to use his service would have their window broken. In 1920, Tommy Lucchese was arrested on auto theft charges. In January, 1921 Lucchese was convicted of auto theft and sentenced to prison for 3 years and nine months. After  he was released from  prison he joined  his old friends Charlie Luciano, Frank Costello and Meyer Lansky who had  had become partners with Jewish gangster Arnold “the Brain” Rothstein selling bootlegged alcohol. In August 1927, Lucchese was arrested under the alias of “Thomas Arra” and charged with receiving stolen goods. On July 18, 1928 Lucchese was detained along with his brother-in-law Joseph Rosato for the murder of Louis Cerasulo; the charges were later dropped. Lucchese was alleged to have been involved in approximately 30 murders. In 1930, during the Castellammarese war, Lucchese and Tommaso Gagliano were both leaders in Reina Family which was aligned with Masseria. On April 15, 1931, with the collusion of Luciano, a hit squad of Vito Genovese, Albert Anastasia, Joe Adonis, and Bugsy Siegel shot and killed Masseria in a restaurant. With Masseria’s death, the Castellamarese war was over and Maranzano was the victor.   Tommy Lucchese was the underboss of Tommaso Gagliano who was the member of mafia commission. In 1951, when Gagliano died of natural causes Lucchese took control of The Lucchese Crime Family. Lucchese appointed Stefano LaSalle as underboss and Vincenzo Rao as consigliore. Lucchese created an alliance with the Luciano crime family underboss Vito Genovese and the Anastasia crime family underboss Carlo Gambino with the long-term goal of gaining control of the Commission. Lucchese became one of the most-respected Cosa Nostra bosses of the Post-War era. He built close relationships with the politicians in New York City and concentrated on the core Cosa Nostra value of making money. End of His Life In August 1965, Lucchese was admitted to Columbia-Presbyterian Medical Center with a brain tumour and heart ailment. He died on July 13, 1967, at his home in Lido Beach, Long Island.