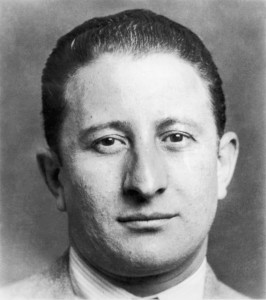 Born – August 24, 1902   Birth Location – Palermo Sicily   Died – October 15, 1976   Introduction Carlo Gambino was born on August 24, 1902 in Palermo Sicily. He was the Boss of the Gambino Crime Family, one of the five major New York City based crime families. Gambino rose to become “Boss of All Bosses” Beginning of His Criminal Life Carlo Gambino illegally entered the United States in 1921. He arrived on the S.S. Vincenzo Florio. He immediately joined the crime family headed by Salvatore “Toto” D’Aquila, one of the largest crime families in the U.S. One of Gambino’s uncles also joined the D’Aquila family. Soon Gambino became involved with the “Young Turks”, a group of Americanized Italian and Jewish mobsters in NYC which included future mafia leaders: Frank Costello, Albert Anastasia, Joe Adonis, Vito Genovese, Meyer Lansky, Charles Lucky Luciano and other 20th century hierarchy. In 1931, after the execution of Maranzano and Masseria, Luciano created The Commission in order to avoid conflicts like the Castellammarese War. Gambino married his first cousin Catherine Castellano on December 5, 1926 and they had four children. Gambino became a major member of Mangano family and was involved in loansharking, gambling and the protection rackets. At this time, Albert Anastasia was the most powerful member and Under Boss of the Magano Family and was the co-founder of Murder Inc, the group that worked as the enforcement arm of Mafia and was responsible for up to 1000 deaths. When Anastasia’s relationship with Mangano broke down he decided to take out the boss and his brother. With Anastasia in control, Carlo became Underboss. Anastasia was abusing his power and the death toll soon racked up. Gambino and Vito Genovese didn’t agree with Anastasia so they planed his murder, paving the way for Genovese to kill Frank Costello and assume control of the Luciano-Costello family He immediately changed the family name to Genovese. With Anastasia gone Gambino became Boss and changed the family name to Gambino By 1960s, Carlo Gambino expanded his reach to Chicago, Los Angeles, Miami, Boston, San Francisco and Las Vegas. The Gambino Family became the most powerful crime family in the U.S. The Gambino family had 30 crews and 500 soldiers earning an estimated $500,000,000. In 1962, Gambino’s eldest son married the daughter of fellow mob boss Tommy Lucchese, the Boss of the old Gagliano crime family. With Lucchese passing away and Joe Bonanno retiring Carlo became the “Boss of Bosses”. End of His life He died of a heart attack on October 15, 1976, while watching his beloved New York Yankees at his home in Massapequa.