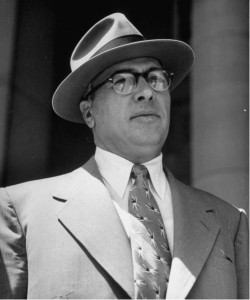 Joe Adonis was born Giuseppe Antonio Doto on November 22, 1902 in the small town of Montemarano, Campania, Italy. He was an American Mobster who became a leading and powerful organized crime figure during the mid of 20th century.

Beginning of his Life

In 1909, Adonis and his family entered the United States at NYC. As a young man, he made money as a thief and pickpocket. He became a close friend of future mob boss Charles “Lucky” Luciano and mobster Settimo Accardi who were engaged in illegal gambling. Both Luciano and Doto got involved in petty rackets such as prostitution and gambling. In 1920’s he changed his name from Giuseppe Antonio Doto to Joe Adonis.

He considered himself handsome and spent substantial time in front of a mirror combing his hair. He became sexually licentious all over the New York City and finally he was detained at one point for raping a woman who declined his advances.

He started working for Mafia boss Frankie Yale who ran a large mafia organization in Brooklyn. Luciano and Joe Adonis rose through the ranks of the Mafia and by 1930 Adonis had joined Masseria’s troops. On 15 April, 1931 Adonis allegedly participated in Masseria’s murder along with three other gunmen Bugsy Siegel, Vito Genovese, and Albert Anastasia.

In1932, Joe Adonis was also a major criminal power in Brooklyn. In spite of his wealth, he still partook in Jewelry robberies, a throwback to his early criminal career on the streets. He also participated in kidnapping and brutal beating in Brooklyn.

During the 1940s, Joe Adonis moved his gambling rackets to New Jersey. At the same time, he became a partner in an illegal casino with Meyer Lansky in Hallandale Beach, Florida.

In 1953, the U.S. Department of Justice had ordered Adonis’ deportation to Italy after it was discovered he was not the American Citizen. In 1956, Joe Adonis voluntarily left New York City. In 1971, the Italian Government ordered him to leave his Milan Residence and move to Serra de’ Conti. In November, 1971 the Italian Government again forcefully shifted him to a small hillside shack near Ancona, Italy for interrogation. Here, he suffered heart attack after the prolonged questioning and some obnoxious treatment. Due to this heart attack, Joe Adonis remained in the hospital for several days and he died on November 26, 1971.