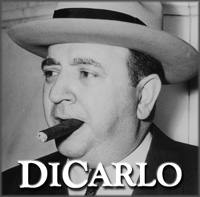 Birth Name – Joseph DiCarlo Birth Location – Vallelunga, Sicily Died – October 1980 Introduction Joseph DiCarlo known as Joe DiCarlo was born on November 8, 1899 in Vallelunga, Sicily. He was the son of the Buffalo region’s Sicilian boss, Giuseppe DiCarlo. He was rejected as the heir to his father’s criminal empire following his father’s death. Beginning of His Criminal Life By 1922, DiCarlo became the underboss of the Buffalo family, but became the most powerful opponent of Stefano “The Undertaker” Magaddino. Magaddino retained him as his underboss in order to maintain peace with the DiCarlo faction and his supporters. In 1945, DiCarlo was downgraded from his duties. He was arrested for assault, coercion, intimidating a witness and violation of federal narcotics laws. After spending many years in trouble as a subordinate of Stefano Magaddino, Joe Dicarlo and his underlings wandered. They were seeking their fortunes in Youngstown, Ohio and Miami Beach before going to home to witness the disintegration of the western New York Mafia. It is suggested that the heat from law enforcement caused Joe DiCarlo to depart the Buffalo area. Dicarlo had supervised operations in Utica and Rochester New York. In Youngstown Ohio, DiCarlo and brother-in-law Sam Pieri ran gambling operations from 1940 to 1950. Later they were run out of the area by law enforcement and supposedly pressure from The LaRocca Crime family based in Pittsburgh who held significant influence along with the Licavoli Crime Family based in Cleveland End of his life From 1969 to 1974 Dicarlo was acting consigliore of the Buffalo mob. Joe DiCarlo was allegedly not endorsed by the full New York Commission, but acknowledged by the Genovese crime family leadership, which represented the Buffalo crime family on the Commission. He stepped down in late 1974 when the new Buffalo regime was sanctioned by the Commission. DiCarlo retired in1975 and died in October, 1980 due to natural causes.