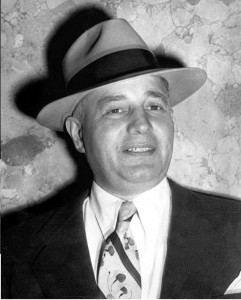 Guarino Willie Moretti was born in Bari; Apulia, Italy on February 24, 1894.He was the Underboss of the Luciano Family and cousin of Frank Costello who was the boss of family from 1946 till 1957.

In 1913, Moretti was convicted of robbery in NYC and was sentenced to state prison for a year. It was his first arrest and he was released after few months due to his young age. After his release from the Prison, Willie Moretti continued working with Frank Costello and his brother who were engaged in crimes such as: Robbery, Extortion, and more.

In 1920 to early 1930’s, Moretti became a very powerful man in New Jersey working for the Genovese Crime Family of New York. During the 1940’s, he ran successful gambling dens in New Jersey and Upstate New York…

In 1950’s, Moretti and other members of Genovese Crime Family were called to testify in front of U.S. Senate Select Committee on Organized Crime. The committee assembled to discuss accusations about the Mafia in the USA, particularly New Jersey and New York. When each witness was called to testify they refused to testify invoking the Fifth Amendment. When Willie Moretti was called he answered questions, told jokes and played it up for the camera. When asked if he was a member of the Mafia he replied “what do you mean, like do I carry a membership card that says “Mafia” on it?” his actions and comments displeased the Genovese and the other New York families.

In 1951’s, Vito Genovese wanted Moretti killed for speaking about the Mafia. They felt Moretti was a danger for them with loose tongue but Costello and Adonis were opposed to killing him but finally Genovese won. On October 4, 1951 Moretti and four other men met for lunch at Joe’s Elbow Room in New Jersey. Moretti and other men were the only patrons in restaurant and when the waitress went to kitchen, Moretti was shot and killed.